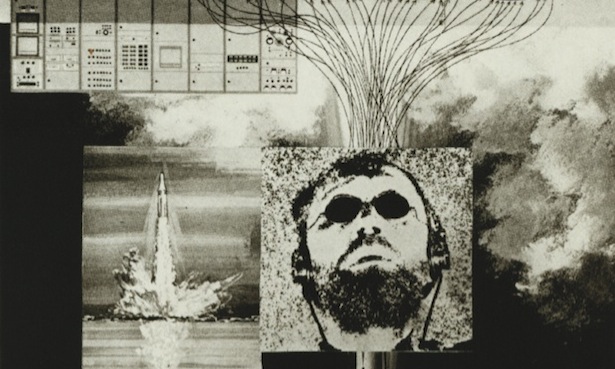 In celebration of Fylkingen Records’ new edition of Åke Hodell’s Verbal Brainwash & Other Works, in what would have been his 100th year, Blank Forms presents the original quadraphonic versions of three of Hodell’s most revered text-sound compositions, plus a reading by Fia Backström of selections from her new translations of Hodell’s written output.

Åke Hodell (1919-2000) was a Swedish writer, visual artist, radio dramatist, and concrete poet who voiced political dissent using electronically treated collages of the human voice, canned sound, and field recordings to pioneer text-sound composition as a hybrid field of sonic inquiry distinct from prior forms of Hörspiel and poésie sonore. Hodell was trained as a fighter pilot, but following a crash during a practice mission in 1941 spent several years recovering in a hospital in Lund. There, he met poet Gunnar Ekelöf and developed a staunchly anti-militaristic outlook that would inform a life’s work imbued with the sounds of warfare and a sardonic aura of death. The minimalist polemics of Hodell’s anti-military phase include verbal permutations critiquing exploitation within the armed forces, an acoustic chronology of European industrial weaponry, and the tape-stretched phonemes of the Swedish word for “present arms,” while his expansive later works used the resources of the Swedish Broadcasting Corporation (Sveriges Radio) to orchestrate ambitious multi-voiced denouncements of international abuses of power. Hodell’s concrete poetry was featured in Emmett Williams’ Anthology of Concrete Poetry and his sound work was published by Henri Chopin’s Revue OU as well as Sveriges Radio and Fylkingen Records’ series of Text-Sound Compositions compilations, alongside peers Diter Rot, Sten Hanson, Bob Cobbing, and François Dufrêne.

Where is Eldridge Cleaver? (1969) is an examination of the death penalty in California and the sudden disappearance of Black Panther leader Eldridge Cleaver following his 1968 presidential candidacy.

Hodell ignited scandal with Mr Smith in Rhodesia (1970) for employing 5 children to record simple Oxford English texts juxtaposing regurgitations of colonial propaganda with an accusation of murder against Rhodesian prime minister Ian Smith, leading to the destruction of the original recording and a 15-year radio ban of the piece.

Spirit of Ecstasy, Racing Car Opera (1977) tells the history of 20th century Western civilization using cars as symbols for the political, social, and economic forces that steered its course.

A larger project focusing on Åke Hodell’s multi-faceted practice will be realized in 2020 by Fia Backström and Elena Wolay. As part of her work translating Hodell’s texts, Backström will read from The Marathon Poet, Hodell’s 1981 book of apocryphal prose commentary on his relationship to literature and output as a poet.

Fylkingen Records’ new edition of Verbal Brainwash & Other Works can be pre-ordered here.

The elevator at The Emily Harvey Foundation is currently under repair, so the second floor space is not wheelchair accessible.  It is located half a block away from the Prince St QR subway stop and two blocks away from the Broadway-Lafayette BDF stop. Please write at least three days before the event and we will make every effort to accommodate you.