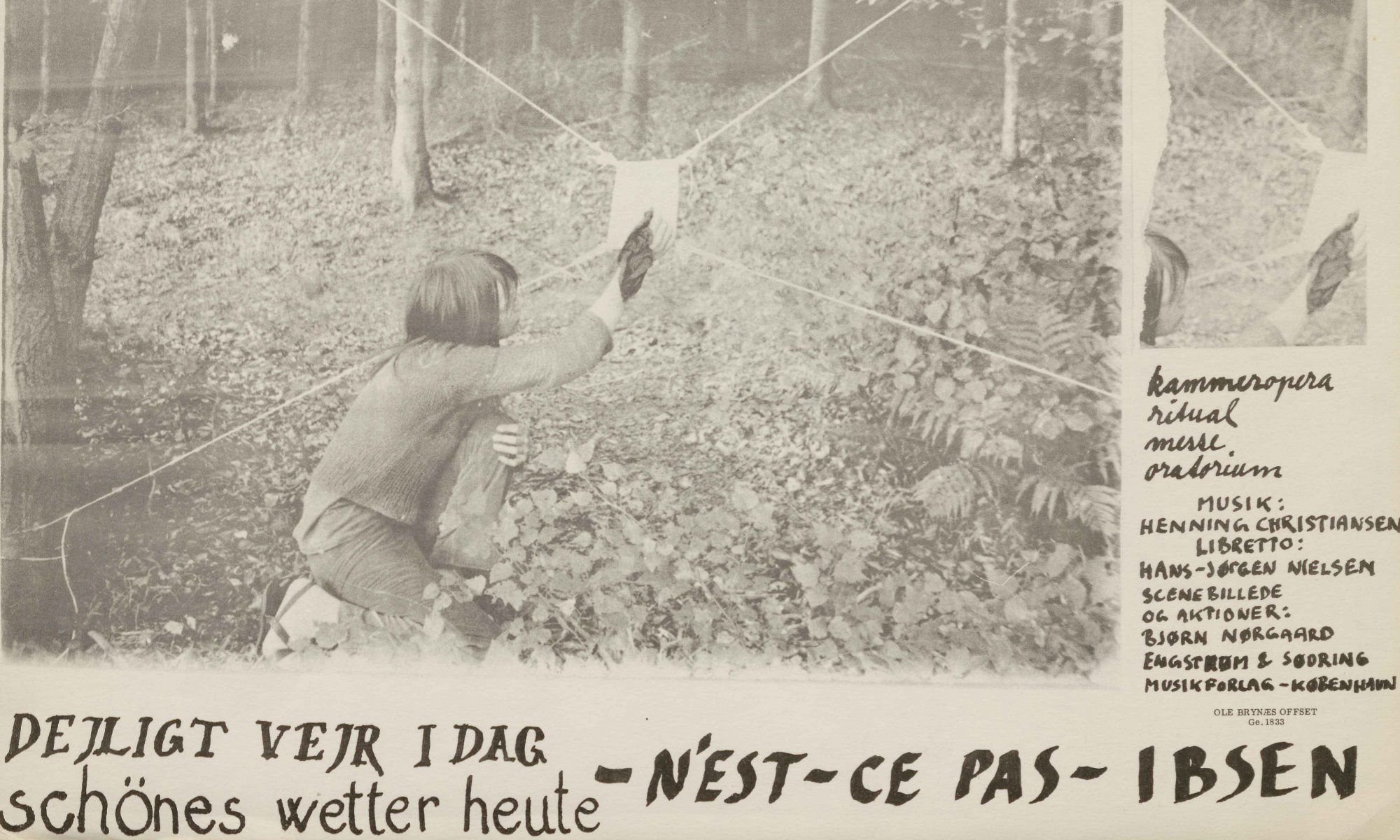 A new realization of Henning Christiansen’s Opus 37, an opera first presented at Aarhus Kunstmuseum on March 22, 1968. In this iteration, the opera will be reinterpreted and staged by Anton Lukoszevieze with an arrangement by his UK-based ensemble Apartment House, conducted by Jack Sheen and featuring Scandinavian singers. Of the opera, Lukoszevieze writes:

“Christiansen’s opera, enigmatically titled Dejligt vejr i dag, n’est-ce pas, Ibsen? [Beautiful weather today, n’est-ce pas (isn’t it), Ibsen?] is perhaps the ne-plus ultra of his objectivity music. The libretto consists of a single short poem by the Danish concrete poet Hans-Jorgen Nielsen. This poem is used as the vocal material and is basically cut-up and reiterated in different ways throughout the opera. There is no plot, no action. The four singers are trapped in a circular world of no beginning or ending—the whole ethos is flat and uniform, corresponding to Christiansen’s theory of anticipation and theatrical time. As he stated, ‘I imagine music that is clear, simple and elementary in its structure—anonymous in the classical sense. A music of awareness where the formal idea is controlled by the rules of the game. Music that is controllable for the listener, in as much as the rules of the game and the idea can be directly heard.’…

Is this a lost classic of the ’60s? Yes, and even in the canon of Christiansen’s own work a relatively unknown piece. The music is strange, beautiful and melancholic—redolent of Erik Satie, but a Satie lost on an island somewhere with just a metronome as his muse. Not a lot happens, but then again everything happens, as time is compressed and yet elongated, rather like the collapsing chimney that bookends Jean Cocteau’s film The Blood of the Poet.”

Since its inception in 1995, UK-based Apartment House have become preeminent interpreters of experimental music, championing work by composers and artists of the historic avant-garde as well as their radical contemporaries. The group was formed by cellist Anton Lukoszevieze—the revolving-door ensemble’s only constant member—with the simple intention of performing work he felt was important, and has since developed into an outfit of voracious research, unearthing forgotten pieces of time-based art as well as commissioning over 100 new works. Apartment House have performed the work of Robert Ashley, Julius Eastman, George Brecht, Frederic Rzewski, Alison Knowles, Nam June Paik, Arthur Russell, Alvin Lucier, Takehisa Kosugi, Louise Bourgeois, Brian Eno, Lou Reed, George Maciunas, Alvin Curran, and Luc Ferrari, to name but a sliver of their repertoire. Due to his interest in Henning Christiansen’s work, Lukoszevieze in 2014 travelled to the island of Møn to dig through the former’s archive, and arranged Christiansen’s extended organ composition Fluxorum Organum for chamber ensemble out of love for the piece. Apartment House have performed in concert halls, art galleries, and clubs around the world and recorded CDs of music by Philip Corner, Christian Wolff, John Cage, Jennifer Walshe, and Cornelius Cardew. In addition, they have a significant relationship with the UK label Another Timbre.