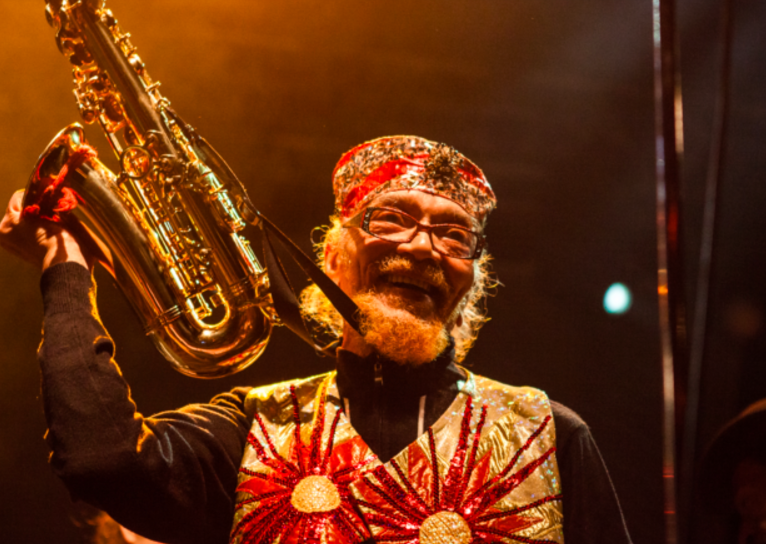 On September 12, 2017 Blank Forms will host our first annual benefit honoring the pioneering composer and bandleader Marshall Allen and the Sun Ra Arkestra. Please join us for drinks, hors d’oeuvres and a special performance by the Arkestra, Mike Huckaby, and Yo La Tengo. Your support will go to helping Blank Forms maintain our innovative programming throughout the next year.

Founded in the mid-1950s, the Sun Ra Arkestra became the primary conduit through which polymath jazz composer, bandleader, pianist, poet, and philosopher Sun Ra expressed his visionary perspective. Whether he was born in segregated Birmingham, Alabama or descended from Saturn, Sun Ra’s mythology transposes the forced dislocation of the African diaspora from slave ship to spaceship, wielding technology and music as an instrument for utopian black interplanetary migration, with the Arkestra as its vehicle. Sun Ra’s aesthetics straddle the ancient and the radical future, positioned between Egypt and the space age. Although he ranks among the earliest pioneers of the synthesizer and the free jazz revolution of 1960s Greenwich Village, Sun Ra’s music has consistently maintained deference to the big band sound of its genesis.

When Sun Ra left planet Earth in 1993, his role as leader of the Arkestra was taken by John Gilmore before the latter’s ascension in 1995, when Marshall Allen assumed its helm. An alto saxophonist, flautist, and electronic valve instrument player who joined the Arkestra in 1958, Allen lived, rehearsed, toured, and recorded with Sun Ra almost exclusively throughout his musical career. At age 93, Allen is the only living member of the Arkestra’s original core group, but maintains that its current incarnation is no ghost band. To the contrary, for Marshall Allen, Sun Ra is not gone. Allen and the other members of the Arkestra continue to live at the Sun Ra residence in Philadelphia, the group’s communal base of drug, alcohol, and sex-free operations since 1968. There, Allen writes fresh arrangements of Sun Ra’s tunes and composes new music for the Arkestra, committed to a life of discipline centered on the further development of Sun Ra’s musical precepts. With such a massive, joyous songbook that encompasses spiritual grooves, sing-along chants and ecstatic fire music, the Arkestra continues to traverse their namesake’s spaceways. As far back as the ‘50s, Sun Ra used to say that the Arkestra was playing the music of the twenty-first century. In today’s political climate their message is more relevant than ever.

Detroit deep house veteran Mike Huckaby in 2011 released two volumes of Sun Ra edits, exclusively using original and sometimes damaged tapes to emphasize a latent danceability in the music of his predecessors. He will open up the evening, playing records from the Arkestra’s catalog, before presenting his Sun Ra Reel-To-Reel Sessions.

Yo La Tengo are a widely beloved American indie rock band from Hoboken, New Jersey. Their subtle, intimate songwriting has graced more than three decades of droning organs and feedback-laden pop but—not unlike Sun Ra’s own fondness for novelty songs and the Disney songbook—Yo La Tengo are also known for their extensive repertoire of cover songs. 2002 saw the release of their Nuclear War EP, featuring four distinct takes on the classic Sun Ra tune of the same name. In celebration of Marshall Allen’s continued work, they warn us once again of the dangers of the atomic bomb with a performance featuring members of the Arkestra and a special guest.

Table purchases are available through PayPal or by check. Contact lawrence@blankforms.org to purchase.

The deadline for name recognition in print is August 15th, 2017. Unable to attend? Make a 100% tax-deductible donation here or sponsor an artist with a ticket.