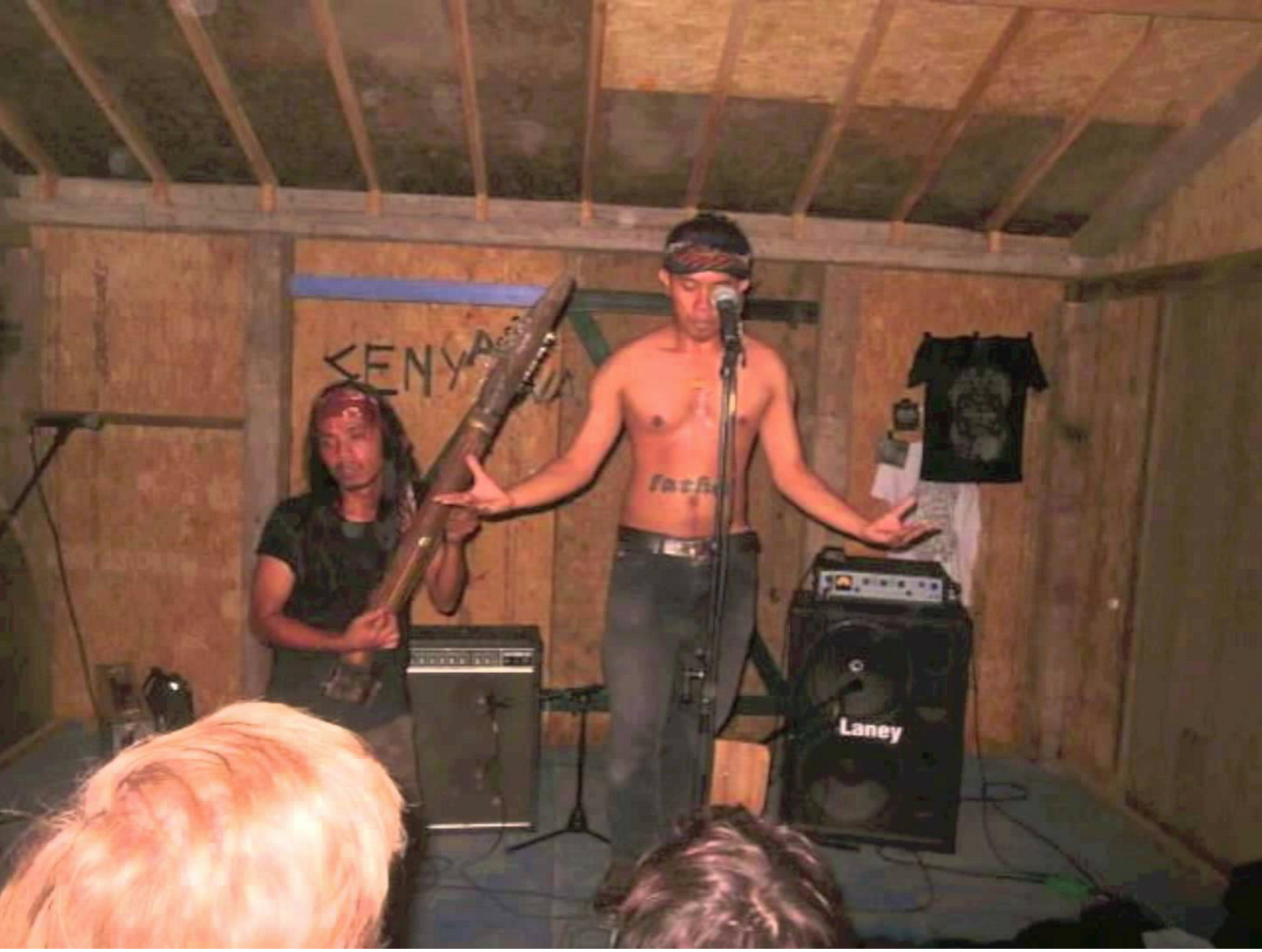 Jogjakarta’s Senyawa were born out of an anxiety about music, a need to create something entirely original. The word “senyawa” literally translates to “chemical compound,” but while the Indonesian duo’s music at first glance reads as a mere synthesis of their disparate influences—the popular heavy metal they grew up with, the traditional Indonesian music of their heritage, and the experimental scene they have found themselves acclaimed by—theirs remains a heterogeneous mix, at once fusion and fission.

Senyawa’s volcanic sound is comprised of Rully Shabara’s deft extended vocal techniques punctuating the frenetic sounds of instrument builder Wukir Suryadi’s modern-primitive instrumentation, such as his primary instrument, the Bambuwukir or ‘Bamboo Spear.’ A thick stem of bamboo strung up with percussive strips of animal skin alongside steel strings, when amplified the Bambuwukir unites elements of traditional Indonesian instrumentation with raw guitar distortion. Sonically dynamic, the instrument can be rhythmically percussive on one side while being melodically bowed and plucked on the other. And at a meter long, with a pointed head symbolizing Indonesia’s resistance to Dutch colonization, the Bambuwukir’s appearance is as striking as it is functional. Shabara’s voice work is equally versatile, capable of verbal gymnastics that can shift from guttural death metal growl to vertiginous glossolalia at the drop of a dime. Eschewing English, lyrics are in Bahasa Indonesia or Javanese until the limits of language open up to what Shabara refers to as “just noise… just Dada”.

Shabara sees Senyawa as a dialectic between himself and Suryadi, his own experience fronting avant-rock band Zoo as the human counterpart to Suryadi’s natural grounding in the traditional Indonesian music that accompanies the Kuda Lumping trance and Kuntulan ritual dances. Their mercurial live performances, 90% composed yet 90% improvised, traverse the idioms of minimalism, psychedelic folk, free-improvisation, and throat singing but when asked Senyawa emphatically affirm—”its metal.”

I.U.D. is the power duo of Lizzi Bougatsos (Gang Gang Dance) and Sadie Laska (Growing, Extreme Violence) whose spastic sound embeds an eccentric dub modality into the tension of throbbing industrial music. Called “minimal, pounding, contagious noise” by Artforum, 2009’s Sparks-referencing The Proper Sex remains the project’s sole major statement but their deep clattering percussion and caterwauling vocal exercises carry on in the live arena, their sprawling performances both as a duo and with collaborator Kim Gordon remaining consistently unpredictable.